Politics in the Pub: Rebekha Sharkie 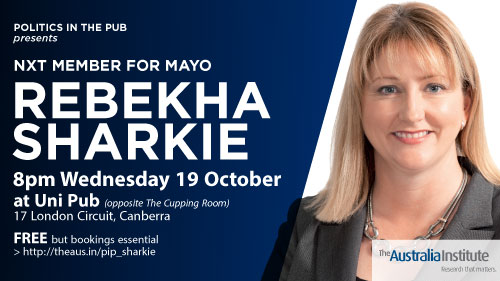 There is no doubt that one of the biggest upsets of the 2016 election was pulled off by Rebekha Sharkie, when she defeated the incumbent member, former Minister and Abbott-loyalist, Jamie Briggs to win the lower house seat of Mayo for the Nick Xenophon Team.

In doing so, the new Federal Member for Mayo, Rebekha Sharkie, is a politician of many firsts. She is the first Nick Xenophon Team member to be elected to the House of Representatives; the first non-conservative politician to represent the once-safe Liberal electorate of Mayo since it was created in 1984; and the first woman to represent her part of regional South Australia since Federation. But it took more than 'the X Factor' to deliver the 43-year-old mother of three a massive 17% election swing.

Rebekha Sharkie will tell you that it was a strong commitment to grassroots politics that took her campaigning from underdog status to a resounding victory. She was a local, campaigning to locals and she used her decades of career experience as a paralegal, an executive in the not-for-profit sector and a researcher and adviser to various Liberal Party MPs to hone her political skills.

[please note: this event is starts at 8pm to accommodate the Parliamentary sitting schedule. Due to the tight numbers in the Lower House, MPs are no longer able to leave parliament before debate adjourns for the day.]