Politics in the Pub: 2016 Political Wrap 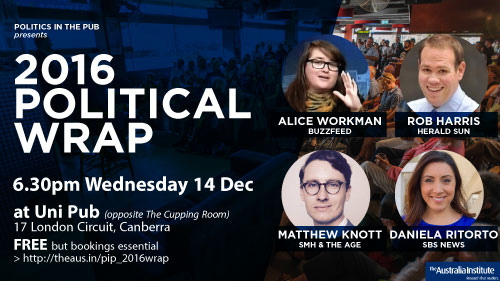 Join us for a very special evening of Politics in the Pub, where we look back at the 2016 political year that was.

It's hard to believe, but in 2016 we've had a Federal election, an ACT election, got a new Senate crossbench and to prove that we should always expect the unexpected -- the Bulldogs won the flag (you thought we were going to say Trump, didn't you.)

Together, they will be joined by MC Ben Oquist, Executive Director of the Australia Institute, to discuss 2016: what even was that?