If you're a 'non-economist' and you've ever wanted to spend the day with Australia Institute chief economist Richard Denniss learning how to write about politics and the economy -- this is your chance!

Schwartz Media, the publishers of The Monthly, Quarterly Essay, The Saturday Paper and Richard's book Econobabble are hosting Richard to teach a Masterclass on writing about politics and the economy. 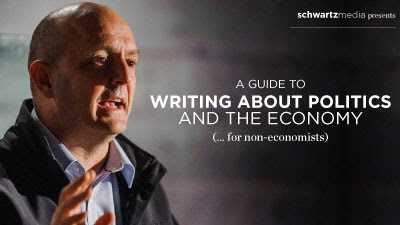 Schwartz Media presents --
A Guide to Writing About Politics and the Economy... For Non-Economists
with Richard Denniss

Economics is everywhere in the public debate, but economists are not. So much of what political leaders say relates to the economy, but so few of them say anything of real substance. Most journalists, like most politicians, are not economists but most journalists, unlike most politicians, feel uncomfortable talking about things in which they are not expert. This course is designed to make writers far more confident in decoding political spin and economic nonsense.

Not in Melbourne but interested in attending this masterclass in your city?